My Jewish Roots and BRCA2 Genetic Mutation Saved My Life

My Jewish Roots and BRCA2 Genetic Mutation Saved My Life 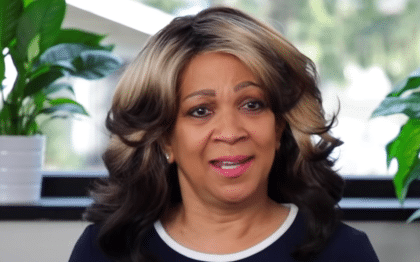 I happened to take an at-home genetic test and found out that in addition to being approximately 52% African American, I had Ashkenazi Jewish DNA. Several months later, when I was diagnosed with breast cancer the knowledge I had about my ancestry motivated me to pursue further testing with my doctor. At that point, I learned that I was BRCA2+. I knew  that I would have a double mastectomy and prophylactic oophorectomy. And then, I just lost it. I felt alone, and I didn’t know where to turn.

I saw Sharsheret’s brochure in my doctor’s waiting room and it talked about Jewish women and breast cancer. Having just learned about my own DNA, I wondered if Sharsheret could help me cope with the emotional side effects.. As soon as I reached out, I knew I had found what I needed.

My Sharsheret social worker and I talk at least once a month. I call to tell her about the great things that are happening in my life, and I call her when I’m afraid because I have a scheduled test or screening. My story is unique, and I am part of a strong community. I am an African-American woman with Ashkenazi Jewish DNA, but even without the Jewish DNA, I know that Sharsheret would have opened their arms to me. I feel supported, understood and empowered.