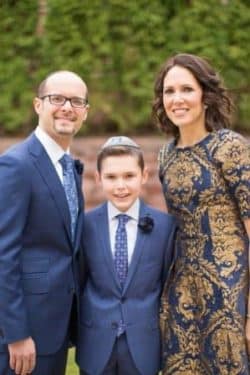 Excerpted from remarks made during 2018 Peer Support Training Webinar

My story began about 9 years ago when I found out I was a carrier for the BRCA gene. My mother who had breast cancer at an early age was urged by my doctor, even after she finished all her treatment, to get the tested for the BRCA gene. She tested positive for BRCA2 and so did my aunt. All of my siblings and cousins then needed to get tested. Only my brother and I tested positive for the BRCA2 gene. Because of my test results, I immediately scheduled my first mammogram and ultrasound at age 32. My mammogram did not detect anything suspicious. However, the doctor mentioned that I should also do an ultrasound, because that is how my mother’s breast cancer was found. He took the extra step to perform a thorough ultrasound and in order to establish a baseline image, he scanned my whole chest and neck area and even under my arms. It so happens that at my first ultrasound he saw something suspicious on my neck. He performed a biopsy and I tested positive for thyroid cancer.

I went through a series of emotions from anger and frustration to anxiety. Not only did I test positive for the BRCA gene and have to worry about the high chance of getting breast cancer, I now had thyroid cancer. My mother said that the BRCA diagnosis was meant to be and that it saved my life. If I didn’t go for an ultrasound at 32, I would have not gone for my first breast cancer screening until at least the age of 40 and my thyroid cancer may have advanced. I did not have the time to deal with my emotions which ranged from frustration to anxiety at the cards I had just been dealt with. I had surgery immediately to remove the tumor in my thyroid.

After my recovery, my breast cancer screening became a series of appointments which ranged from 5 tests every 6 months, a mammogram, an ultrasound, bloodwork, a routine physical exam, and an MRI. I slowly built a health history file where I was carefully monitored for any changes to my breast tissue. I became accustomed to this whole process. At first I was angry that I was the only young woman in my family that was BRCA positive but then my mother helped me to realize because of this knowledge, I had the power to be in control of my health.

At this point I did not reach out to anybody, I was very reserved about my situation and really just leaned on my family for support. I knew there were other people out there that may be going through what I was going through, but I was so caught up in the day-to-day of working and running a household that I did not lean on anybody outside of my family. It was lonely and isolating at times but I had my routine.

About 5 years ago, at age 36, I made the decision to remove my ovaries once I finished with having children. This minor surgery was encouraged to eliminate and mitigate my risk of cancer. Since my mother had gone through this very same surgery, I leaned on her for support and guidance. As I approached age 40, only a year ago, the recommendations were to entertain the possibility of a prophylactic double mastectomy to greatly decrease my chances of being diagnosed with breast cancer. The recommendations are suggested about 10 years before the first breast cancer diagnosis in the family. I was making my son’s Bar Mitzvah the same year and I could not give this major health decision the full attention that it needed. I pushed this decision off for another year and it all came to a head the week my son’s bar mitzvah was over.

The breast imaging specialist who I have been going to for the past 9 years decided to retire. My family said that this seems like a sign that it’s the right time to do this major surgery since I would no longer be so carefully monitored. Although I had already gone through two surgeries since my diagnosis between my thyroid and ovaries, this decision somehow seemed more daunting. I was overwhelmed and began to go through all the emotions that I went through 9 years ago when I was first diagnosed. I was angry, frustrated and upset that I had the BRCA gene and had to make all these decisions about my health. I did turn to my mother for support had a bi-lateral mastectomy. However, the process was completely different for her because of her cancer and radiation treatment. While my husband and my family have been so supportive of me over these past 9 years, they just couldn’t give me the advice I was looking for. I needed to find out and to see if there are other mothers that were young, mothers that had to make this decision, mothers that had young children but old enough to understand and witness the recovery process, mothers that were just like me.

I made the call to Sharsheret who first listened to my story and then put me in touch with other women who shared similar experiences through their peer support network. Every person had a different story and did not have the same exact circumstances as me. But every person I spoke to had enough similarities and was able to offer me comfort or advice that greatly helped me through my two-part surgery and recovery that took almost a full 6 months this past year. There was one peer supporter who told me how she handled telling her children about the surgeries. There was another peer supporter who gave me advice about what to expect during my recovery, what the types of clothes to wear, how I would feel. I finally felt like a huge weight was lifted off my shoulders, there are others out there that were going through similar situations as me, there is a whole community that I could lean on for support and Sharsheret was holding my hand every step of the way, checking in, sending comforting words and small gifts that made me feel like I deserved to experience all the emotions I was going through.

My children do not know that I am BRCA positive because I do not yet know if they carry the gene and I don’t want them to be scared or angry like I initially was. I did explain to my children that because I had thyroid cancer and there is a family history of breast cancer, I have the power to make the best decision for myself and for my health by having this surgery. This was the advice I received from one of the peer supporters, not to focus on the genetic component but to focus on other health circumstances that helped me get to this decision and show my children I had the knowledge and power to be in control of health. I was sorry I did not make the call sooner to Sharsheret throughout the other phases of my journey leading up to this point. Some people choose to remain very private about things and some people choose to be outspoken about their story. At Sharsheret, you can choose to remain open or anonymous and share your story either way and be there to help others. After my recovery, I chose to volunteer and become a peer supporter because I realized that even if I could only make one person feel better or offer one tip that could help them in their journey, it can make all the difference in their lives.